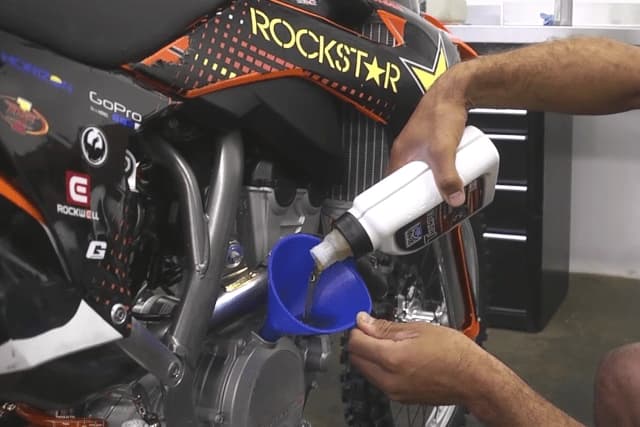 Oil is an essential commodity for all engines and other motorized machines, but the truth is that most of them require oil that is specific to them. So, can car oil be used on a 4-stroke Motorcycle engine, and why?

For an engine to function as it should, it is necessary to put in oil. Oil works in various ways, often times as a lubricant, and other times as a coolant. Thing is, however, that oil for a car engine and oil for a motorcycle engine are made to fulfill two different functions. In a car, oil is ideally made to work as a lubricant which ideally allows all moving parts to work in harmony with minimal friction, a characteristic that significantly increases fuel economy as well as efficiency. On the other hand, motorcycle fuel is aimed at lubricating the wet clutch which is charged with transmitting on to the drivetrain. As it does this, there needs to be a balance in the friction level so that it is neither too high nor too low. So, no, it is not advisable to use car oil in your 4-stroke motorcycle engine.

So, what exactly would happen if you use car oil in your 4-stroke motorcycle engine?

Effects of Using Car Oil on a 4-stroke Motorcycle Engine

The transmission does not receive enough lubrication

If you use car engine oil in a motorcycle, you may have to deal with wear and tear a lot sooner than you anticipated since transmission takes quite a beating. Poor transmission means less harmony, causing bits and pieces of metal shavings to come off of many parts.

The unique thing about a 4-stroke motorcycle engine is that the transmission and engine are more or less the same, and when one breaks down, the other follows suit pretty quick. The metal shavings actually speed up damage, and you may have to replace the engine entirely.

So, what exactly should your motorcycle oil be doing for you?

Since the engine and gearbox depend on the same oil to function seamlessly, the oil needs to be able to protect your gearbox from possible damage. It should also keep the engine well lubricated and protected from damage as well. This is largely why motorcycle engine oil is made using unique technology that caters to both the engine and gear box.

Balancing between friction and lubrication

For your motorcycle engine and transmission to work as best as they should, there is need for fine balance. This means that it should have the consistency to facilitate proper lubrication, but balanced enough to keep friction at a minimal. When the oil is too light, the clutch will fail to engage since it will slip due to lack of enough traction. Be certain to pick engine oil that is ideal for your motorcycle, and you might want to talk to the bike’s manufacturer to be sure what direction to take.

Sheer stability is indicative of the amount of viscosity an oil uses when it is being used, and since motorcycle oil is used to lubricate both transmission and engine, a good deal is demanded from it. for this reason. It is imperative to choose an oil that will maintain integrity even after being used for hours on end. Seeing as most bikes are meant to be serviced at 10,000km, you need to make sure that your chosen oil will be in a position to maintain the intended or expected viscosity. This will make certain that your engine and transmission will receive as much support as they need to function optimally.

What types of oil are used in a motorcycle?

This is ideally made to be used in smaller motorcycle engines, especially because it is the most basic type of oil there is. It is one of the most generic types, and it is largely affordable, usually cheaper than most other oils in the market.

This type of oil is also made for motorcycles that are small, but that are used on a regular basis. For instance, if you take yours to work or to school every day, you need to get a good semi-synthetic oil. As the name suggests, it is a mixture between mineral and synthetic oil.

This type of oil is considered the best for high performance since it boasts really good quality. It is ideal for larger engines and for motorcycles that are used in intense activity such as racing. This oil is completely synthetic and it has no trace of mineral oil.

Vehicle and motor cycle engine operate quite differently, and for this reason, you ought to make sure that you do not mix the oils up as this could mean the difference between a properly running engine and a ruined one. Make sure that you select an oil type that works best for your machine, and to do this, it is important that you talk to your machine’s manufacturer.

Yes, they usually are.

Can I use motorcycle oil in my car?

Yes, you can, but only for a short period of time.

Tyler Williams reiterates that no one really likes cheap stuff; getting a new bike is a daunting task and it even becomes more complex if you are getting a second-hand deal. Well, there are so many complexities surrounding motorcycle acquisition, the reason why Tyler Williams came up with the extensive excerpts. Tyler insists that new bike owners, should take their time and check the exhaust of the machine, the clutch brakes and suspensions, the chain sprockets, and the wheels during purchase. What’s more, the overall look of the bike is equally important as it gives one a vivid idea of how it would look when not on the road. Tyler is a certified mechanic, safety instructor, and motorcycle trainer, when not working in his garage, he loves to read.